We would like to measure the current -> field-strength relationship as seen by the particles in traversing D1.
This can be done by removing the Q123-D1 section of the beampipe to allow access inside D1, and measuring the field as the current is ramped. This could be done during the ISIS short shut-down in late May 2018.

The purpose of this ticket is to co-ordinate this activity: those interested (or not) in taking part should add (or remove) themselves as "watchers".

The exercise will need the following to be working Personnel required:

Based on the RADOS readings last maintenance day (2µSv in 10 minutes) I've estimated that the synch team should have 4 hours to make measurements - this is tight for covering the full current range with two separate probes, so may need to consider having a second team.
(This is an under-estimate as we'd have had several days for things to cool, but we have to go by conditions at the time.)

The Q123-D1 section of pipe was removed during the Easter break: see photos

The wall thickness of the beam chest/box is about 1/2" and the clear aperture is about 5" (this is consistent with the nominal pole spacing of 6"), implying we need a puck about 2.5" / 6cm high.

Note the extra restrictions as the circular flange overlaps the square section: 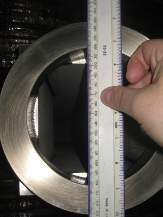 ISIS have confirmed they expect to have cooling water for D1 available through next shutdown. We should run later in the shutdown when the synch has cooled.
I am taking Wed. to Friday (23rd to 25th May) as the window of opportunity, intending to take the measurements themselves on Thursday 24th but with the expectation this will move should ISIS need to take priority. We'd then have Health Physics in on Wed. and have Friday to replace the beampipe.

The work will entail entry into an ISIS Controlled Area for ionising radiation, so everybody MUST have

(see RAL_ISIS_Induction - if they have expired (or you're not sure) contact miceadmin@stfc.ac.uk to arrange)

You will also need

I would leave these until May, as they'll expire on 30th April if done immediately.

Hi all,
Please note that anybody needing synch access will need swipe access to R5.4 RF Hall, which needs approval from ISIS; anyone who doesn't have this should therefore fill out the user part of the permission form and send it back to me ASAP. All those I've received by end of the 15th May I will try to get signed off en masse.
If in doubt, it's easier to just fill the form in again...

I've had the access forms for Craig and Tom signed off by ISIS.

John Govans and I have run the Trench water for half an hour - everything looked OK and no sign of major leaks. John will run up both the Trench water and the Loading-Bay Chiller circuits on Monday, so all controls / monitoring should be active from then until the end of the week.

Updated by Kurup, Ajit about 4 years ago

I've had a look at the controls software and all appears to be working. The controls phone number was disconnected so I have a new number now, it's 07546432914. Give me a call if there are any issues.

have you already asked ISIS when the synch would be open and cleared for us? Just to let Craig and Tom know when they should be at RAL,

Rats - I got distracted from this on Wednesday :(.

I think Health Physics were expecting to do the radiation survey on the Tuesday, so if those numbers are OK we can either go for for Wednesday while the iron's hot or Thursday as planned.

As above, my expectation is that people will be available for Wed. through Friday: we still need to be able to react to changing circumstances.

It turned out that there'd been some misunderstanding and Health Physics were planning to do the survey on Wednesday. I asked and they've kindly done the surveys of both the synch and DSA (D2) already, with no reported concerns (though I haven't seen the numbers yet). The MICE Hall water has been conditioned and I will check the power supplies this afternoon, but it looks like the equipment will be ready to start first thing tomorrow if we are ready.

The HP measurements from today can be read and calibrated so I do not think we need any other measurement tomorrow. Thanks to Craig, Henry and Tom.

So the final data-taking has been completed a day ahead of schedule!

Next week we will return the power supply keys and mothball the conventional magnets.